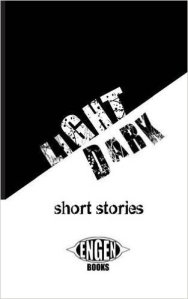 The April 2012 mega collection light|dark, which introduced the world to the enigmatic monster-hunter Scarlett, the Reptilia virus, and the shadow organization Omega gets a shiny new look this month courtesy of a new cover designed by Ellen Curtis, and the changes aren’t purely cosmetic.

“We’ve worked to combine the two Engen Universe anthologies into one epic volume,” says Curtis, of the collection. “Our series’ are where people can go to delve deep into the characters, but if they just want fun, action-packed stories that introduce them to our Universe and world, the new light|dark is now a one-stop shop.”

END_OF_DOCUMENT_TOKEN_TO_BE_REPLACED 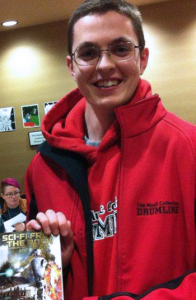 Young author Sam Bauer, who debuted in 2016’s stellar anthology collection Sci-Fi from the Rock has taken the time to share his thoughts and feelings about his neighboring stories in the collection.

Whitecoat by Kenneth Tam:
“After reading this, I definitely need to pick up a copy of the novel itself. Set in an alternate Newfoundland, with a somewhat nebulous difference from our own, the quality of this story promises great things from the novel.”

Sunny Days by Jennifer Combden:
“I love a good hard sci-fi piece. With this dealing with our own sun destroying us, it certainly fulfills the author’s purpose of informing people with literature.”

The Shoe by Matthew LeDrew:
“A brilliant story. This piece reminds us about how we may be viewed many years from now with other than human eyes.”

Immune by Jennifer Combden:
“Perspective plays a big role in literature, and the perspective chosen for this piece is excellent. The perspective of a child in a disaster is not one I often see, and it was used phenomenally in this piece.”

Hag Ridden by Tara Murphy:
“I love horror, as can be discerned from the fact I wrote a bit of horror in this anthology. This one is frightening because what happens in it could happen to anyone, without you being able to stop it. Brilliantly done!”

Invasion by Matthew LeDrew:
“Another chilling story by Engen’s resident horror writer. One of two horror stories by Matthew in this anthology, its unnerving tone and final reveal sent shivers down my spine.”

END_OF_DOCUMENT_TOKEN_TO_BE_REPLACED

After keeping it under wraps for far, far too long, Engen Books is proud to reveal the cover to Sci-Fi from the Rock, the anthology collection we’ve been working on for well over a year with the helps of editors, generous contributions from other authors in the field, and artists.

This beautiful piece combining multiple mediums was crafted by Kyle Callahan of Kyle Callahan Photography. It incorporates stunning photography with stylized computer-generated art to bring the themes of classic sci-fi into the iconic landscape of St. John’s, Newfoundland.

“Kyle came to me with this amazing concept of one of the classic, long-limbed robots from 60s science-fiction coming down into the Narrows, and I know he understood instantly what we were going for,” said Matthew LeDrew, founder of Engen Books. “We’re exceptionally please with this.”

END_OF_DOCUMENT_TOKEN_TO_BE_REPLACED

Submissions for the 2016 anthology edition of Sci-Fi from the Rock are now closed! Those authors who were accepted by editors Erin Vance and Ellen Curtis have been contacted and will be announced as their contracts come in. The first announcement though, is that Sci-Fi fan favorite Super Galactic Space Explorers author Jay Paulin has brought his space-faring furious felines to the collection in a new prose story titled “Spooky’s Gambit”… with bumper art by series co-creator Ariel Marsh!

The contents of the story are closely under wraps, but fans left wanting more in the wait for Super Galactic Space Explorers vol.3 will not be disappointed.

If this is just the first announcement… what else could be in store? Stay tuned in the coming weeks to find out, and pick up a copy of Sci-Fi from the Rock this April!

END_OF_DOCUMENT_TOKEN_TO_BE_REPLACED

Many of the Engen Authors are active on the literary social-media platform GoodReads, where users can rate, review and discuss books as well as interact with their favorite authors. One such author is Jay Paulin, author of Gristle While You Work, a short story in the light|dark collection, as well as multiple comics from his company Ink’D Well Comics, including Messiah, Super Galactic Space Explorers, and a series of anthologies whose proceeds benefit various children’s charities.

This time around, he chose to review the Steve Lake short story Legacy of the Full Moon, first printed in the now-out-of-print original Sci-Fi from the Rock anthology.

Steve Lake’s Legacy of the Full Moon introduces us to Ryan Murphy, a vampiric, preternatural investigator. In comics, we have John Constantine and Cal McDonald providing hard-boiled, hard-edged paranormal entertainment but Murphy isn’t given similar room to breathe. The tale is fairly straightforward: he is hired by Liam O’Connell, the last of his family’s line, and is requested to visit the hermit’s ancestral home. After some dialogue and a completely unsurprising revelation, there is some brief action but I simply wasn’t pulled into the world. On the bright side, Lake’s ending was intriguing to the point that I await more of Murphy’s adventures. This is just a tiny morsel but next time, I want a full course meal.

Note: This was my introduction to characters I’ve since encountered a handful of times, and I count myself as a fan. Do yourself a favour and — if nothing else — download the eBook. You’ll probably become a fan as well!

Be sure to sign up to GoodReads and join the conversation! As the original volume of Sci-Fi from the Rock is currently out-of-print, Engen Books has made the 19-page short story available for free on the GoodReads website, and we encourage everyone to download, read, enjoy, rate and review!

Legacy of the Full Moon by Steve Lake
My rating: Sci-Fi from the Rock

Click to go right to the GoodReads page for this title!

Sci-Fi on the Rock 2012 has come and gone and once again proven to be a massive success for Engen Books and everyone involved!

After getting an early start on Friday, the five Engen Authors in attendance began a record-setting weekend of fun, laughs, and most importantly: bringing new, great fiction to the masses.

Jay Paulin was there as a double-guest, working in his capacity as founder of Ink’d Well Comics as well as Engen Author. Seated directly north of the Engen booth, collectors had easy access to multiple signatures from authors of light|dark.

“We made new friends, caught up with old ones and promoted Ink’d Well Comics,” said Jay Paulin via his blog. “The thing is, you all know a convention weekend isn’t just what happens during show hours.”

Authors launched for the first time included Andrea Edwards, who wrote Scarlett for light|dark and came by to sign some copies as well!

Engen writing workshops on writing and writers block were open to a packed room of young authors, each ready to overcome whatever is “blocking” them and become the next big thing in the province.

It was a great year for Engen with more to come in the coming months! Stay tuned!

Inspired by friend and fellow writer Matthew LeDrew, whom I first met at Hal-Con 2010, I decided to sign up here and start posting.

The early plan is to post large updates on weekends. From time to time, I’ll post interesting things I stumble across during the week.

The large updates, also taking a page from LeDrew, will focus on my writing process and inspirations.

Hopefully you enjoy these little musings and you find reason to stick around.

edit: I welcome any and all comments, providing they aren’t spam or vulgar. I want to keep this a place where writers and readers of all ages can visit. To help ensure this, I have comments set to be moderated. Hopefully everyone understands my concerns. Thanks!