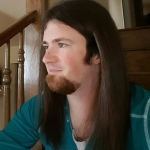 Christopher Walsh is an author from Brigus South, Newfoundland. His fantasy series Gold & Steel, began it the epic As Fierce as Steel, released in early 2016, and has since continued in various short form anthologies. The sequel, The Worth of Gold, will be available soon.

When not writing, Chris works as an apprentice carpenter and enjoys reading a variety of material with particular interest in other fantasy works. He’s also an avid video gamer and hiker.

Chris is an active member of the writing community in the Atlantic Provinces, and currently serves as a member of the WANL (Writers Alliance of Newfoundland and Labrador) board.

The Pitch: The third heir of an unhinged, ruthless religious fanatic family unleashes his devoted cult army on the entire continent, hoping to seize power by domination. Having already run through the west coast of Illiastra, the followers of Valdarrow set their sights on the stronghold city of the Dwarves: Dhalla. With a brutal horde headed their way, the Chieftain clans of Goldenhair and Snowbeard must ready soldier and citizen alike for what may come. Most of all, they must prepare themselves to risk all to save dwarvenkind itself.

As Fierce as Steel by Christopher Walsh
Series: Gold and Steel, #1

The Pitch: As Fierce as Steel is the inaugural entry into the world of Gold & Steel, a new fantasy series from Canadian author, Christopher Walsh. It is centered around the lives of two women, those of the Lady Orangecloak and Lady Marigold Tullivan. One is the leader of a brave group of young men and women in open rebellion of their government. The other was born into that patriarchal world and destined for greatness, as a trophy wife, a fate she will do anything to alter.