This weeks snap was particularly fun, and it’s the first week in ages I feel like I have a truly exciting day to break down for you!

First off, the snap was based entirely around the fact that I picked up this INCREDIBLE witchy hat from The Realm of Fates Boutique at Sci-Fi, and it absolutely needed to be captured as soon as I physically could. The detail in it is exquisite, and while you can’t see it from the snaps because I always face the wrong direction, there’s a real wasps nest delicately attached to the hat, among other magical pieces. There will definitely be another shoot with this beauty, if nothing else to showcase the detail & magic that it possesses! I should also note that the necklace that I am wearing is also from the boutique, despite it not always being visible. Basically, go see them for any magical/witchy/fairy/elven/earthy request you may have!

The cauldron I borrowed from Tara & Noel because they’re awesome and had a cauldron! Dress came from the depths of the closet (literally took me taking out EVERY DRESS to find it), and cape was a random online find last fall!

I don’t often share my foundation ideas for photos, I like letting people come up with their own ideas and stories, but it’s a little funny this week! The plan was to head out into my magical woods, and find a nice mossy spot (because the moss is growing green again up there!), and I was going to be a springtime witch, creating a spring spell! I had a bag of flowers, a million vines, and of course my magical lil wand. The goal was to have vines draped over the sides of the cauldron, have smoke bellowing up from inside, and have a light inside as well, catching the smoke and giving off a magical glow! I’d have vines and flowers in my hand and wrapped around me as well for extra effect!… however. 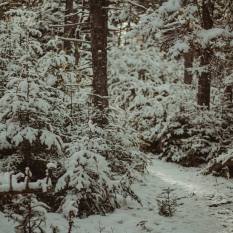 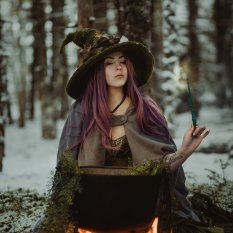 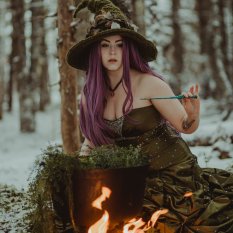 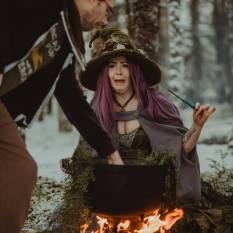 Well, as I’m sure most of you know, we woke up that morning to a fresh blanket of snow, so I had to semi alter my train of thought! I wouldn’t get my green mossy patches, but bringing flowers and green in with the snow around actually worked out, so I figured I’d make it work!

By the time I was ready to shoot, looking out my window, the snow was completely gone, and I was back to my original idea!.. until we got to my magical woods which sits at a higher elevation, and realized there was more snow up there than where we were originally- and it was dreamy! I will admit, I’m completely ready for warm weather, tiny flowers, green moss, and being able to run barefoot through the woods without risking death, but driving up to the spot and getting out of the car, and peering down the untouched trail with snow piled up on the tiniest branches without a breath of wind had me re-excited for snow and the magic winter brings. It was a sweet little surprise, that I clearly needed ❤

Once we dragged everything to our location, I set up a smoke machine inside the cauldron, and had it connected to a generator (which I’m sat on/in front of for most of the shots). We let that heat up, and Drew set up our ‘strainer/flower’ base for the cauldron to sit on, because we realized that morning that I didn’t have a plan for ‘fire’ under the cauldron. Oops! Conveniently, I had a bag of flowers begging to be burned, and we have far too much kerosene for any sane couple, so it worked out! I set up the tripod/camera/trigger combo, hopped into position and did a few test shots to make sure I was lined up. Drew started drowning the flowers in kerosene, and I got the remote all set.

Fire- EXPLODES AND ENGULFS EVERY VINE/FLOWER/HAIR IN CLOSE RANGE

We very quickly realized that less kerosene was the key! The fire melted my precious draping vines in a matter of seconds, and I was lucky to not catch the dress on fire(oops!). Once the fire died down a bit, I settled in. I hit the remote to generate some fog from the smoke machine (had the light inside also ready to hit the fog and light it up), ONLY TO HAVE IT SCREAM AT ME, and let out a teeny fizzle of smoke.. Low and behold, I had taken the wrong machine.. We have 3 smoke machines kicking around in my dress closet, and I took the only one that doesn’t like to work, but instead lets out a death curdling scream. There goes that idea.

Despite the fire eating my spring items, and the fog machine literally screaming no, we made it work and had a laugh! I set up my phone flashlight inside the cauldron balanced on a set of gloves so as to not get too hot from the fire below, and we only swapped out the flowers from beneath the cauldron once for a new set. It was cozy by the fire, despite sitting in the snow, and having no wind was truly wonderful!

We thankfully didn’t encounter anyone on the trail, until we were loading up the car- Which of course is when I come barrelling out of the woods in my witchy garb, carrying a cauldron that weighs as much as I do. I tossed it into the trunk, and smiled at the two poor fellows who were unloading a skidoo who happened upon us. We piled into the car and drove off to Tim’s for a hot beverage ❤

It felt good to be back in the groove of it all, so now I’m hopeful for the weeks to come!!