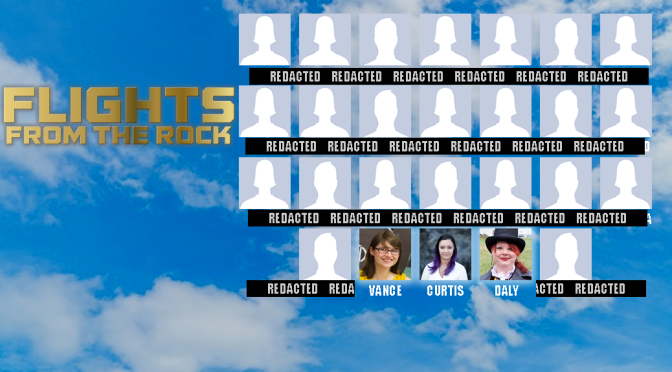 Engen Books is proud to formally announce the editing team between 2019’s Flights from the Rock: Erin Vance, Ellen Curtis, and Lisa Daly!

Erin Vance is an editor and a graduate of the Memorial University of Newfoundland English Honors Program. She won the Arts and Letters competition when she was just 14 years old in 2007 with her short story, “Something White.” She is featured in the Nelson Literacy 7 Homegrown (Newfoundland Edition) with her poem “Rough Draft.”

Erin wrote her Honors thesis paper, Song of the Mockingjay

on exploring the nature of Katniss Everdeen’s agency in Suzanne Collins’ The Hunger Games series. She is creative, spiritual, and loves reading, writing, and anything to do with words.

Erin is the co-editor of the From the Rock anthology series, which highlights Newfoundland talent in genre writing, and is the editor-in-chief for Engen Books.

Ellen Curtis was born and raised in St. John’s, Newfoundland. Her aptitude for the written word began at a young age, when she began filling paper with stories and other scribbles. Those scribbles eventually began to make more sense, and in 2008 she published her first collection of short stories. Since then, she has gone on to co-author the Infinity series with Matthew LeDrew, among her other literary endeavors.

Ellen earned her Bachelor of Arts from Memorial University of Newfoundland in 2015, and was under the illusion that completing her studies would mean she would have more free time. In reality, it simply means she does more reading, albeit for work. When she actually does find a spare moment, she enjoys spending time near the ocean nursing an espresso and daydreaming about the day she can fill her home with the happy bleating of Pygmy goats.

Lisa Daly is an Archaeologist, historian, professional ballroom dance instructor, crafter, and avid baker currently living in Fredericton. She has published an extensive library of non-fiction works, the most recent including Sacrifice in Second World War Gander, in Canadians and War, Vol. 3. Lammi Publishing, Canada and An Empty Graveyard: The Victims of the 1946 AOA DC-4 Crash, Their Final Resting Place, and Dark Tourism, in AP Online Journal in Public Archaeology, 8(2): 79-98. She made her fiction-writing debut in Dystopia from the Rock with her short story, “The Island Outside the War.”

Lisa joins the team as a guest editor, bringing with her a wide range of aviation and historical knowledge to make Flights from the Rock as authentic as possible.

Twenty-Three authors will be joining Lisa Daly, Ellen Curtis, & Erin Vance for the 2019 Flights on the Rock collection! We still have award-winning and prolific authors in the genre to announce! Who will join them? Stay tuned and Never Look Back!

For exclusive content and FREE books, be sure and check out the Engen Books Patreon.