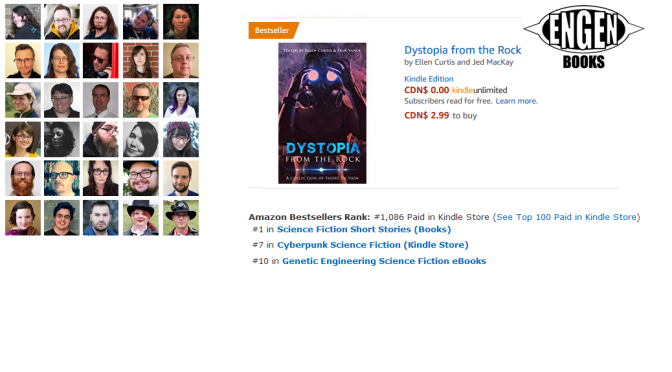 Dystopia from the Rock, the fourth volume in the modern From the Rock series, hit #1 Bestseller on February 21, 2019 at 8:22 AM Newfoundland Standard Time: a full month before its release. It reached #1 in the category of ‘Science Fiction Short Stories,’ and ‘Cyberpunk.’ As of this writing it has reached #1086 on the overall paid Amazon ca charts, #7 in Cyberpunk Science-Fiction, and #10 in Genetic Engineering Science-Fiction.

Dystopia from the Rock features thirty-two short stories written by a diverse mix of some of the best speculative fiction and thriller authors in Canada, including both award-winners, veterans of their craft, and brand new talent.

Edited by Erin Vance and accomplished genre author Ellen Curtis, this collection features the thrilling, creatively charged, astonishing fiction that showcases the talent, imagination, and prestige that Canada — both in the Atlantic region and beyond — has to offer.

9:45PM update:
#1 Short Story Collection in all of Canada
#25 in all of Literature & Fiction in Canada

One thought on “‘Dystopia from the Rock’ becomes Amazon Bestseller in multiple categories!”