If you have any kind of feel for the zeitgeist then you’ve noticed that the horror genre is having quite the moment nowadays. There have always been successful horror movies like Paranormal Activity or Saw that spawn lucrative imitators, etc. but presently there are releases that are also enjoying heaps of critical praise like Get Out, Hereditary, and The Witch. Some critics have labelled these “elevated” horror, but I think that’s a condescending and unnecessary classification. Any horror fan will tell you that the genre has always enjoyed a wealth of sophisticated material, despite being unappreciated by mainstream critics. Nevertheless, it’s hard to deny the quantity of quality in addition to the box office remuneration.

I would argue that horror as a genre is in a unique position to take advantage of the present media landscape, particularly the way media is currently consumed and disseminated.

I don’t have to tell you that the internet has massively disrupted various industries, particularly film. One of the interesting ways the internet has changed the game is how it’s fragmented attention. To appreciate this point we have to look at the diffusion of innovation, which is shown in the chart below. 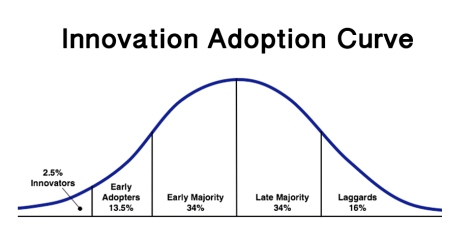 The “innovators” and “early adopters” are the connoisseurs, the obsessed. They’re the ones who will wait in line opening night, who know all the imdb credits of their favourite directors, the fanatics. The ones at the end, the “laggards,” they’re the ones who only watch movies when they come on TBS in the middle of the afternoon. In the middle are the average viewers, the “early” and “late” majority. They like to go see movies, but they’re not fanatics. Traditionally, marketers went after them, because they were the biggest number. Simple math, right? Make an ad on TV that gets the biggest number of eyeballs. Wanna advertise Batman v Superman? Put it on the Superbowl. The downside though is that the market is pushed into focusing on the lowest common denominator. Hence, Batman v Superman.

However, with the internet disrupting traditional media, it’s hard to target these people. Moreover, as marketing guru Seth Godin explains, consumers now are inundated with choice but, due to the fast pace of modern life, have less time. Consequently, they’re less likely to take chances and will stick with what’s familiar. Hence why the MCU is so successful right now, and why so many studios are trying to imitate it.

So, the challenge/opportunity here is: How do we introduce something new in this landscape? Godin argues we must go after the connoisseurs. That is to say, instead of marketing to the hoi polloi, target the fanatics. If you can hook them, they’ll bring their normie friends along. That line between the “early adopters” and “early majority” is the tipping point. We all have that one friend who’s obsessed with something to whom we consult. If I’m in the market for a new phone, I’ll ask my techie buddy who’s into that kinda stuff. Likewise, if my friends are looking for a book to read, they’ll ask for my opinion.

Godin emphasizes the Japanese term “otaku,” which is kinda hard to translate into English, but is pretty similar to geek or nerd. In Japan it’s mostly used for people obsessed with anime or manga. But I think we can also apply to it to, say, ramen. There is a real Japanese subculture of ramen nerds. They’ll travel all over the country and wait in line for hours to try the hot new ramen spot. Godin makes the point that some commodities have otaku and some don’t. In the West, for example, hot sauce has otaku but mustard doesn’t. How many flavours of hot sauce do you see in the grocery store vs mustard? Or even ketchup for that matter.

I’d argue that horror has a strong otaku. There are tons of horror geeks out there. Fans who collect obscure DVDs and memorabilia. It is therefore primed to take advantage of this present internet media landscape. Small independent studios making eccentric horror don’t have to worry about marketing to the hoi polloi. They can go right to the nerds who will then bring the normies along. The market conditions have never been better for visionary horror creators.

I realize this can all come across as a little cynical or exploitative, but I think it should be inspiring to those of us who wanna make interesting content, be it horror or something else. You don’t have to feel like you’re relegated to the margins, or that you have to dumb your stuff down to appeal to the masses. Go after that small group of people who’ll really get and appreciate what you’re doing and let word of mouth do the rest of the work.

The catch, of course, is that you have to do great work.

One thought on “Otaku ’bout It: Why Horror Is Having a Moment”