Last weekend I attended a panel on world building in genre fiction. There was a lot of interesting discussion, including one question a lot of genre writers grapple with constantly: When does world building stop? As in, when does world building become tedious exposition. After all, the reader doesn’t want an encyclopedic presentation of your lore; they want a dramatic story. I’m not sure about the precise numbers, but I’m willing to bet The Hobbit and Lord of the Rings have sold a helluva lot more copies than The Silmarillion.

When it comes to world building, I think the biggest challenge genre writers face is knowing when to stop, recognizing what they can, and should, leave out. The analogy I often use is that the writer is like a chef and the reader is their customer. When most people go to a restaurant, they don’t care about the work that’s gone into the dish. All they care about is the meal. What kinda soil did these turnips grow in? What sorta grain did this cow eat? Most people don’t care about this. They wanna eat their steak and veggies in peace. Likewise, do I really need multiple paragraphs on the history of every little village your adventurers pass through? No.

Sure, there are foodies and the whole farm to table movement of people who are really interested all that extracurricular stuff (The Silmarillion does sell copies). However, that’s extra. If you make flavourless food no one is gonna eat it no matter how much you tell them about the acidity of the soil.

Hemingway said “If a writer of prose knows enough about what he is writing about he may omit things that he knows and the reader, if the writer is writing truly enough, will have a feeling of those things as strongly as though the writer had stated them.” Easier said than done. This is difficult for genre writers because there’s the fear that leaving out certain bits of information will leave the reader confused.

So, let’s say you’ve committed all these hours to drafting your writing and have developed a robust universe for your characters to experience. What sorta techniques or principles can you deploy to avoid falling into exposition traps.

David Simon, showrunner of The Wire and other great TV series, makes a great point when he observed that the viewer “loves being immersed in a new, confusing, and possibly dangerous world that he will never see. He likes not knowing every bit of vernacular or idiom. He likes being trusted to acquire information on his terms, to make connections, to take the journey with only his intelligence to guide him. Most smart people cannot watch most TV, because it has generally been a condescending medium, explaining everything immediately, offering no ambiguities, and using dialogue that simplifies and mitigates against the idiosyncratic ways in which people in different worlds actually communicate. It eventually requires that characters from different places talk the same way as the viewer. This, of course, sucks.”

Don’t be afraid of ambiguity. Andrew Stanton (writer/director for Finding Nemo and Wall-e) said don’t give the audience 4, give them 2+2. Don’t be afraid to let your reader work for their meal, so to speak. Let them fill in some of the gaps. That’s part of the fun.

When Han Solo tells Luke Skywalker the Millennium Falcon is a great ship because “it made the Kessel Run in twelve parsecs,” we don’t need to know what the Kessel Run is. We think, “oh this must be some kinda inter-galactic smuggling thing,” and now our imagination starts expanding this universe even more. Or we might even think, “this guy sounds like he’s making this up,” which builds character. It’s not necessary to see Solo for any of this to work, if anything it might ruin it for a lot of people. 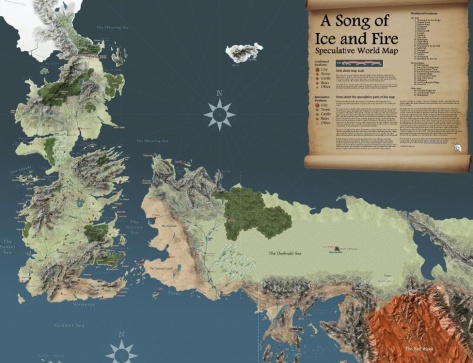 So, ultimately, it all comes down to storytelling. Most people don’t care about your homework. World building is a means to an end. Figure out what that end is and don’t worry about your readers understanding every inch of your setting.

One thought on “Farm to Table: Worldbuilding vs Storytelling”