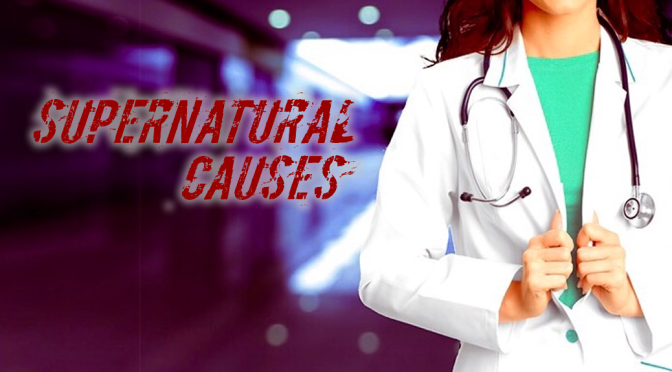 Engen Books is proud to announce the latest book in its banner 10-year anniversary 2017 lineup: Supernatural Causes by Amanda Labonté!

Described as a paranormal medical mystery, Supernatural Causes features college freshmen Liesel Andrews as she spends her days studying pre-med and her nights stitching up werewolf bites. As a human who has the rare capacity to see the vampires, werewolves and witches who live in the shadows, Liesel pays her tuition by moonlighting as a medical intern at St. Benedict’s Hospital for the Underworld. She figures she’s doing a decent job of balancing her two lives until Jax Halloran walks into the ER. Not only is he tall, dark and obnoxious, he’s also a high-ranking vampire who needs her help. A virus is threatening the vampire community and Liesel may be their only hope at finding a cure.

“We’re very excited to be bringing this into the world,” says Engen founder Matthew LeDrew. “We have a proud tradition of genre fiction at Engen Books, and it’s part of our mission statement to prove that innovative, exciting, thought-provoking fiction like these can stand up to snuff in our market.”

Supernatural Causes will start as eBook only, with the first installment being released on April 15, 2017 in time for Sci-Fi on the Rock. The series releases will be structured like an ongoing serialized television show, with a new “episode” once every two months. Each 4-episode “season” will tell a continuing story and will be collected in print and digital collections.

Look for Supernatural Causes to hit all digital formats this April, and Never Look Back!