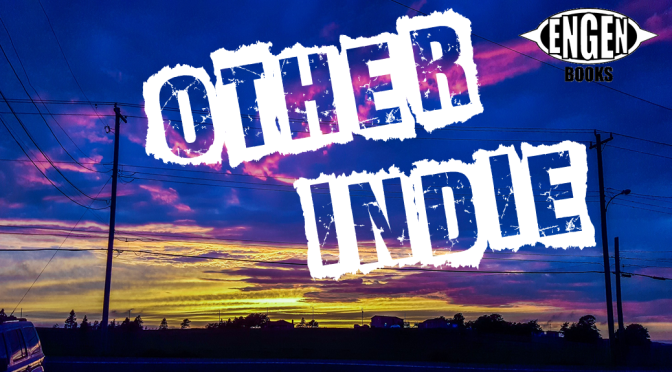 Zombies on the Rock: Outbreak is a 2015 action-thriller by Corner Brook native Paul Carberry and was independently published via AuthorHouse, a self-publishing print-on-demand business based in the United States. It is set in the near future and stars an ensemble cast of likeable, identifiable characters as they deal with the very early onset of a zombie outbreak (hence the novel’s subtitle). Characters like Hank, Chris, Eric, and Cathy must navigate the astonishing and brutal landscape of this not-too-distant future in order to be among the survivors as the island of Newfoundland — and the entire world — is plunged into an apocalyptic nightmare.

One of the great foibles of publishing genre fiction in Newfoundland is that it can be immensely limiting. If the story isn’t set in Newfoundland many local retailers won’t carry it, but if it IS set in Newfoundland it all too often destroys the reader’s suspension of disbelief: world-altering apocalyptic events don’t seem plausible in Newfoundland, hence why fiction of those genres tend to take place in populated hubs like New York or Los Angeles. What Carberry does in Zombies on the Rock is walk that fine line with style and finesse not often seen from an author’s first outing, so much so that this may be one of those rarest of rare gems: a horror novel which transcends its genre and becomes something more, permeating the cultural lexicon and becoming a genre unto itself.

While the action takes place primarily on the west coast of Newfoundland (including several shout-outs of a place near and dear to my heart, Burgeo), Carberry makes it clear that this is a global event: as the first half of the noel progresses, news programs and stories come in about a rabies-like viral outbreak happening at different points around the globe… this is happening everywhere, Carberry just chooses to tell us the regional story of how this event affects those local to western Newfoundland. In that respect the novel does for zombies what Signs

did for aliens (which I say as a compliment).

The people in this book react the way people of this province would: they see this disaster on the evening news and are rightly horrified, but at the same time they shrug and say “glad it’s not happening here.” We’re very guilty of that in Newfoundland, as our island affords us a certain degree of protection from epidemics that might run rampant in other parts of the world. This creates a sense of dread and suspense over the first half of the book, as the characters go about their lives unaware of the danger that is about to befall them. This is truly masterful suspense by Carberry, who clearly understands that suspense occurs when the reader knows something the character does not.

This book is a fun action thrill-ride with lots of great characterization and careful plotting, but don’t let the fun you’ll have reading it fool you into thinking this is just another pulp novel: there’s more going on here from a literary sense as well. Carberry chose to name a company in this novel Pharmakon, something that did not go unnoticed. Those with a keen eye will find allusions and clever, biting commentaries that will enhance the read and elevates this from the sort of entry in the horror genre which is merely enjoyed to the sort of entry which is studied.

I love taking the Freudian method of dream analysis and applying it to literature. Quick/Dirty rundown: you take the part of the book that bothered you the most, then spin the analysis so that that is what the book is about. At least, what it’s about for you.

What ‘bothered’ me about Zombies on the Rock were the scenes expressly dealing with Pharmakon, and the nearly one-dimensional way their greed and apathy negatively affected the lives of the innocents in this novel. It plays on  a general mistrust of power, a xenophobia that in the end is sadly justified as the epidemic spreads, forcing the Newfoundlanders to retreat in order to survive. I can point to many scenes that would support a reading of this text having an anti-corporate slant, such as any of the scenes with Pharmakon, or the scene when a pastor refers to the corporate greed of “charging $2.00 for water.” For anyone who understands Newfoundland history and Newfoundland culture, these are powerful statements, as many of us feel that “big corporations” and “outsiders” have been able to pillage our island for far too long, and long to return to a more natural and peaceful, traditional lifestyle… just as the surviving members of the novel are forced to near the end of the second act. Read this way, Carberry has written a cautionary tale that is a metaphor about the dangers of corporate greed — but even as it shows us the worst of what can happen, it gives us solace by reminding us that there is a solution.

These are big, bold themes that have a broad appeal while still being, at their heart, decidedly Newfoundland. Carberry wisely doesn’t dwell too long on them, but like most great authors in the genre, he leaves enough on the bone to form thoughts and ideas in the minds of his readers about just what kind of future they want.

This is an astonishing first novel from Paul Carberry. I read it over the course of two days, and in those two days my time was divided thusly: reading it, and wishing I were still reading it. Part police procedural, part action-thriller, and part disaster movie, Zombies on the Rock is a must-read for any fans of the horror genre, and any who think that independent genre authors in Newfoundland don’t have anything to offer.

Zombies on the Rock: Outbreak

is available in print and electronic formats. Check it out, a must-read for people interested in supporting good independent  fiction and those who like my work.

‘Other Indie’ is a recurring series of articles on Engen Books in which authors highlight the best in independent publishing, in the hopes of helping readers break through the cluster of books they may not be sure about in an age when anyone can publish via digital formats. Engen Books is an independent small-press publishing company based in St. John’s Newfoundland and is proud to highlight the talent of independent authors not our own. Zombies on the Rock: Outbreak is © 2015 Paul Carberry. This review is © 2016 Matthew LeDrew.  ‘Other Indie’ banner photo credit: Steve Lake.