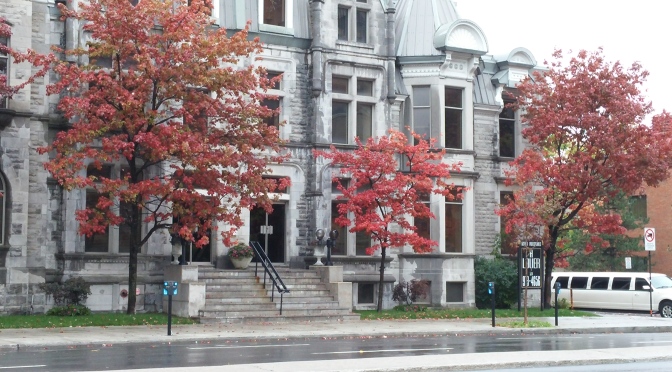 I am sure all of you were eagerly waiting last night for a blog post. And perhaps you even waited until this morning, wondering how the Epic Journey of Erin and Michael is going. Finally, perhaps around 9:00 this morning (which is 7:30am over here; I was awake, but not aware yet), you realized the awful truth: Erin did not write a blog post concerning the events of October 8th. How dare I!

Quebec is a very confusing province for two monolingual individuals. As we do not speak its main language, we come across as being either boorish or ignorant, or perhaps even both. Highways that lead into the cities are *confusing*, and traffic is pretty nuts. It’s likely similar in Toronto, I am aware. I am already dreading it.

I always knew that Quebec was going to be my least favourite part of this trip. As much as I want to see Old Montreal and the Biosphere (and now the Planetarium), I knew it was going to be confusing and messy, and basically outside of my comfort zone.

It was certainly outside of Michael’s.

On the plus side: We are out of the worst of it now. All we have to do is get out of Montreal in two days (and we plan on doing this rather early in the morning to make it simpler), and drive through on our way back home in 6 weeks. We can calm down now.

I think we are finally calming down.

The reason you lovely people did not get a blog post yesterday is because the thought of writing one up was too exhausting to fathom. We drove for nine hours yesterday, and both Michael and I had headaches by the end of it, and I still don’t understand why New Brunswick requires you to pay a toll to enter, and the hotel room was very cold, and Michael and I got rather lost before the end of it. One of my friends told me to get a GPS system for our car before we left for this trip; I did not, instead I compromised by getting data on my phone and becoming comfortable with the Google Maps app. LET ME TELL YOU THIS APP WAS A SANITY SAVIOR. Both yesterday and today.

I was going to be not so nice about Quebec City in my blog, but the very last person we spoke to this morning was very nice, considering Michael and I were two boorish Newfoundlanders who only know two words in French (maybe 10 words between the two of us). So, Quebec City is not *awful*. I just never want to go there again.

Montreal is much better. The highways are much better marked, and people speak both English and French here! And they don’t mind when you only speak one of them!!! It is pretty; Michael and I arrived before our host was ready for us, so we walked around downtown Montreal for a couple of hours. It is very beautiful here, and has all these stores I’ve only heard of before, and Michael pulled me into this place that I thought was gonna be super creepy, but actually turned out to be a HUGE COMIC BOOK STORE. It was actually the size of Timemasters and Downtown Comics COMBINED. While we did not buy anything, we did gawk like the two small-towners we are.

The Lord was very merciful, and we have found nearby parking. Apparently, you aren’t allowed to park in this particular area between 10am and 11am on Tuesdays and Fridays, but since that doesn’t apply to us, we’re just gonna stay there. We’ll probably end up taking the subway to the Biosphere tomorrow so we don’t have to move our car, and walk to Old Montreal since it’s only a 40 minute walk away (according to Google Maps, anyways, and I have learned that it is fairly reliable). Our host is very nice, and the room smells really good, and I might even try to do some laundry in the bathtub tonight because I am running out of clothes.

I know what you’re thinking: Didn’t you bring any clothes, Erin??

I did. I brought five days’ worth. Guess what? Today is ADVENTURE DAY FIVE. Laundry will not be much of a problem after this point as we are staying with family and friends starting on Wednesday, and I think they will be kind enough to let us use their machines.

The only other thing I have to say is that the men here are rather nice to look at. Michael is annoyed – apparently the girls are much prettier back home – but I have never seen so many young men with nice hair and suits on. Michael finally began to laugh at me, but I think after the last couple of days, I deserve to have something nice to look at. It’s not like I want to live here – although I do like it here. About as much as I liked Charlottetown, but in a completely different way. Charlottetown was open and green and quiet; Montreal is colourful and crowded and busy. But organized too.

Michael and I are planning on having a quiet night tonight – it’s been a busy couple of days, and I have some editing/writing I want to do, and Mike has… something, I’m sure. We plan on being tourists tomorrow, so you should have a nice, interesting blog post waiting for you sometime after supper. After that, it’s three straight days of driving… I think we will be quite happy with a break in Rockhaven.

Thank you all for your thoughts and prayers. Know that we’re thinking and praying for you too.