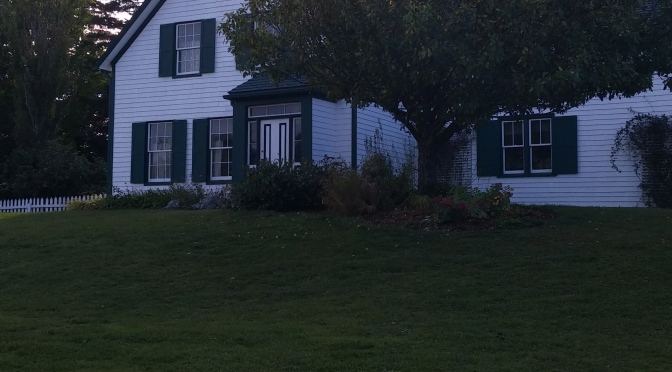 So! Big day today. Many things happened – enough things that I actually made a list. I have since lost the list, but the point is still made by the fact that I had to write a list at all.

(It’s probably in the car somewhere; I just don’t feel like searching it out.)

First things first: Mom, Dad, Erica, and Kyle – you were right. The ferry was no big deal. (I made Michael drive.) I can’t even tell you much about it because I was asleep before 10:30pm, and the ferry didn’t disembark until 11:45. I mean, every time they made an announcement, I was rudely woken up, but I was asleep again within a couple of minutes.

Am I a real person yet? Not quite, but I am getting there.

Second thing: Is there something in the water of Nova Scotia that makes the animals really stupid? Michael and I spent less than 4 hours in Nova Scotia, and we counted 27 roadkills with a couple other possibilities. This is almost a 700% increase from what we saw in Newfoundland – and we drove for ten hours yesterday. Now, I am aware that there are more people and likely more wildlife in Nova Scotia than Newfoundland – but 7 times as much? Really? I dunno, I think there’s something up with that.

Third: We are not the only people going on a road trip across Canada. Last night, I had some trouble parking the car in the parking lot they use to line up the cars for the ferry, because some guy was parked at the end of the aisle facing a totally different direction than everyone else, and it threw me off. Enough that Michael had to tell me to turn around and just go around the guy. Now, I’m not exactly the spy-type, but I was looking in his car, and I saw a mess of pillows and luggage in the backseat. I admit that I was curious, and so I made note of his face (and not because I was annoyed about this guy throwing me off). This morning while we were waiting for them to call us to our vehicles, I heard some guy talking about his cross-country road trip – “Yeah, I’m hoping to get into Yellowknife if the weather holds.”

It was the guy. The same guy. I have not yet decided if this means I forgive him for his faux pas, or I am more annoyed with him for being a road-trip twin. I may never decide.

Fifth: I don’t feel the urge to explain my excitement over that. Windmills are cool. I like them. We should have them. But Nova Scotia also had fog – except it was weird, because unlike Newfoundland where it kinda creeps in and creeps out (you know, it’s like a shadow where it kinda fades out at the edges), in Nova Scotia, it lifted and fell like a switch. Just bam! There one minute – bam! Gone. I was gonna say a curtain, but it was more abrupt than a curtain. It was a switch. Or a severe mood swing.

So, ultimately, Nova Scotia reminded me very much of home – Michael even commented on the similarities – but I like Newfoundland more. Its mountains were pretty cool though.

Sixth: New Brunswick is flat and farmland, and I think I saw llamas at one point – and I’m so sorry again, Ellen, for not getting pictures – and it was beautiful. I almost understand why you have to pay a toll to enter it… Almost.

Seventh: I suppose it’s time to explain the title… Michael said that. He said it mostly about me, because as I drove around PEI, trying to find Green Gables, I had the roof down on the car, and I got totally lost. Other drivers were beginning to look at me oddly, and passed me whenever they could. Not that I blame them; it turns out that, when I’m tired at least, I have no sense of direction. Although, to be fair, I didn’t have a map either… So, I think I did fairly well, all things considered.

So, yes. We’re in PEI. I saw Green Gables. I grinned like a madman, I shook a little, I danced, and I have stuck the sticker that allowed us into the park on my phone so I may keep the memory forever. I took videos for my mom, and learned more obscure facts that made things even better. If I was on Tumblr, I would say that I was crying. Instead, I just giggled a lot.

Tomorrow is an easy day – we’re gonna see Anne & Gilbert, and then meet Newfoundland dogs. I will probably go from being super excited to being super homesick. My poor brother.

May God bless you all,

2 thoughts on ““We May Have Style, But We Have No Sense of Direction.””